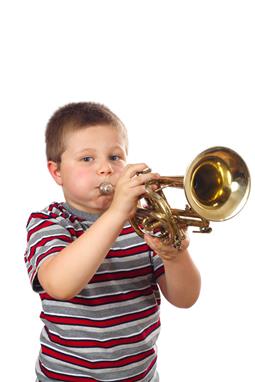 Benefits of a music education are plentiful, and all children can benefit greatly from receiving a music education.  Music education develops sophisticated cognitive learning skills, aids in mathematical understanding and develops better reading skills.  Additionally, learning music is a fun way for children to develop social skills and self-esteem. The information below is from the National Association of Music Education website www.nemc.com

The benefits conveyed by music education can be grouped in 4 categories:

Perhaps the basic reason that every child must have an education in music is that music is a part of the fabric of our society. The intrinsic value of music for each individual is widely recognized in the many cultures that make up American life — indeed, every human culture uses music to carry forward its ideas and ideals. The importance of music to our economy is without doubt. And the value of music in shaping individual abilities and character are attested in a number of places:

Success in society, of course, is predicated on success in school. Any music teacher or parent of a music student can call to mind anecdotes about effectiveness of music study in helping children become better students. Skills learned through the discipline of music, these stories commonly point out, transfer to study skills, communication skills, and cognitive skills useful in every part of the curriculum. Another common variety of story emphasizes the way that the discipline of music study — particularly through participation in ensembles — helps students learn to work effectively in the school environment without resorting to violent or inappropriate behavior. And there are a number of hard facts that we can report about the ways that music study is correlated with success in school:


In an analysis of U.S. Department of Education data on more than 25,000 secondary school students (NELS:88, National Education Longitudinal Survey), researchers found that students who report consistent high levels of involvement in instrumental music over the middle and high school years show “significantly higher levels of mathematics proficiency by grade 12.” This observation holds regardless of students’ socio-economic status, and differences in those who are involved with instrumental music vs. those who are not is more significant over time. — Catterall, James S., Richard Chapleau, and John Iwanaga. “Involvement in the Arts and Human Development: General Involvement and Intensive Involvement in Music and Theater Arts.” Los Angeles, CA: The Imagination Project at UCLA Graduate School of Education and Information Studies, 1999


A study of 811 high school students indicated that the proportion of minority students with a music teacher role-model was significantly larger than for any other discipline. 36% of these students identified music teachers as their role models, as opposed to 28% English teachers, 11% elementary teachers, 7% physical education/sports teachers, 1% principals. — D.L. Hamann and L.M. Walker, "Music teachers as role models for African-American students," Journal of Research in Music Education, 41, 1993

Success in school and in society depends on an array of abilities. Without joining the intense ongoing debate about the nature of intelligence as a basic ability, we can demonstrate that some measures of a child’s intelligence are indeed increased with music instruction. Once again, this burgeoning range of data supports a long-established base of anecdotal knowledge to the effect that music education makes kids smarter. What is new and especially compelling, however, is a combination of tightly-controlled behavioral studies and groundbreaking neurological research that show how music study can actively contribute to brain development:

In a study conducted by Dr. Timo Krings, pianists and non-musicians of the same age and sex were required to perform complex sequences of finger movements. Their brains were scanned using a technique called “functional magnetic resource imaging” (fMRI) which detects the activity levels of brain cells. The non-musicians were able to make the movements as correctly as the pianists, but less activity was detected in the pianists’ brains. Thus, compared to non-musicians, the brains of pianists are more efficient at making skilled movements. These findings show that musical training can enhance brain function. — Weinberger, Norm. “The Impact of Arts on Learning.” MuSICa Research Notes 7, no. 2 (Spring 2000). Reporting on Krings, Timo et al. “Cortical Activation Patterns during Complex Motor Tasks in Piano Players and Control Subjects. A Functional Magnetic Resonance Imaging Study.” Neuroscience Letters 278, no. 3 (2000): 189-93.


Researchers at the University of Montreal used various brain imaging techniques to investigate brain activity during musical tasks and found that sight-reading musical scores and playing music both activate regions in all four of the cortex's lobes; and that parts of the cerebellum are also activated during those tasks. — Sergent, J., Zuck, E., Tenial, S., and MacDonall, B. (1992). Distributed neural network underlying musical sight reading and keyboard performance. Science, 257, 106-109.


Researchers in Leipzig found that brain scans of musicians showed larger planum temporale (a brain region related to some reading skills) than those of non-musicians. They also found that the musicians had a thicker corpus callosum (the bundle of nerve fibers that connects the two halves of the brain) than those of non-musicians, especially for those who had begun their training before the age of seven. — Schlaug, G., Jancke, L., Huang, Y., and Steinmetz, H. (1994). In vivo morphometry of interhemispheric asymmetry and connectivity in musicians. In I. Deliege (Ed.), Proceedings of the 3d international conference for music perception and cognition (pp. 417-418). Liege, Belgium.

Each of us wants our children — and the children of all those around us — to achieve success in school, success in employment, and success in the social structures through which we move. But we also want our children to experience “success” on a broader scale. Participation in music, often as not based on a grounding in music education during the formative school years, brings countless benefits to each individual throughout life. The benefits may be psychological or spiritual, and they may be physical as well:

“Studying music encourages self-discipline and diligence, traits that carry over into intellectual pursuits and that lead to effective study and work habits. An association of music and math has, in fact, long been noted. Creating and performing music promotes self-expression and provides self-gratification while giving pleasure to others. In medicine, increasing published reports demonstrate that music has a healing effect on patients. For all these reasons, it deserves strong support in our educational system, along with the other arts, the sciences, and athletics.” — Michael E. DeBakey, M.D., Leading Heart Surgeon, Baylor College of Music.


“During the Gulf War, the few opportunities I had for relaxation I always listened to music, and it brought to me great peace of mind. I have shared my love of music with people throughout this world, while listening to the drums and special instruments of the Far East, Middle East, Africa, the Caribbean, and the Far North — and all of this started with the music appreciation course that I was taught in a third-grade elementary class in Princeton, New Jersey. What a tragedy it would be if we lived in a world where music was not taught to children.” — H. Norman Schwarzkopf, General, U.S. Army, retired


“Music is about communication, creativity, and cooperation, and, by studying music in school, students have the opportunity to build on these skills, enrich their lives, and experience the world from a new perspective.” — Bill Clinton, former President, United States of America