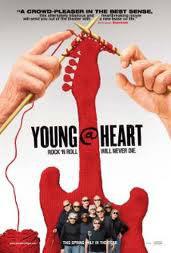 For the feel good documentary of 2007, one only has to view Stephen Walker’s [email protected] This is a very charming, heartwarming and heartbreaking film about an extraordinary chorus based in Northampton, Massachusetts, with a median age of 80! British filmmaker Walker saw the [email protected] Chorus in England during their European tour in 2005 and knew he needed to get the word out about this incredible group of “seniors behaving badly” who were as moved by the music themselves as much as they moved others.

Just so you don’t think these singers are mired in your “typical” senior citizen mix of Lawrence Welk and Mitch Miller oldies but goodies, this chorus sings everything from OutKast to The Beatles, The Rolling Stones to Coldplay and Sonic Youth. The group is first introduced with a primal scream from 92-year old Eileen Hall, a real flirt, who fronts the chorus for The Clash’s “Should I Stay or Should I Go.” The film covers the chorus’s seven-week preparation for their big Northampton spring concert in 2006. It moves through difficult and taxing rehearsals on seven new songs, many health issues with a number of the members, and an emotional concert for inmates at a local prison. What is especially uplifting about this film is the high level of dedication of the members who will do everything they can to attend rehearsals and performances because they experience such joy in creating music.

The chorus was started in 1982 by Bob Cilman, a passionate music director who has a flair for choosing very eclectic programs which may challenge each member. He creates such an incredible sense of camaraderie and purpose that viewers may very well find themselves searching for a local choral outlet for their own creative energies.  This is a film about the incredible power of music.

Rated PG for some mild language and thematic elements.