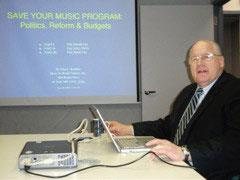 John L. Benham is an enthusiastic advocate for music education programs -- so much so that he criss-crosses the United States, helping music educator and parent groups present a strong case to school officials that keeping school music programs operating is fiscally responsible.

Benham was on one such mission the week of December 7. He traveled to Fairfax County, Virginia, to help the Fairfax Arts Coalition for Education (FACE) prepare a presentation for the Fairfax County School Board. According to FACE, "The [Fairfax County Public Schools (FCPS)] Elementary Band and String programs were named in a Strawman Poll as possible cuts to this year's FCPS budget. This cut would entirely eliminate the elementary band and strings programs, and consequently would destroy band and strings on all levels in Fairfax County." Benham visited MENC at the National Center for Music Education (located in Fairfax County's Reston) and previewed for the MENC staff the case he had built using statistics on teacher hours and student involvement. He was accompanied by MENC member Keith Taylor, a K-12 music specialist for the Fairfax County school system.

Benham discussed the Fairfax County situation in particular, but he suggested any music educator look at the big picture as budget cuts threaten school music programs. In addition to lost teacher jobs, and the fact that the students who no longer have music programs have to be taught something by someone else, lack of music programs means students don't buy or rent instruments locally, causing a loss of potential tax revenue. Government officials understand that kind of reasoning, he said.

Benham also said that "a financial crisis always exposes an educational philosophy." Challenging the idea that cutting a music program saves money -- by showing that it doesn't in the long run -- uncovers what is really important to the decision-makers. "Do they really care about the kids, or is it just numbers to them?"

"Get your [music] boosters involved. You have to convince them this is just as important than all of the fundraising they do," Benham advised.

He said he suggests that concerned citizens also let students help make the case. Students can attract publicity for the cause in creative ways. He mentioned band students who marched down the street holding radios blaring marches by John Phillip Sousa.  At a school board meeting, a student played "Taps" to protest the potential demise of his music program.

In addition, said Benham, it's imperative that music teachers themselves "stick together" when programs are under fire, and they must remember that cuts to one part of school music ultimately affect them all.

President of Music in World Cultures, Inc., Benham consults as an advocate for music programs throughout the United States and the world. He is also director of graduate studies in music at Bethel College in St. Paul, Minnesota, where he developed a masters of arts degree in Ethnomusicology. Benham is a Lowell Mason Fellow, recognized by MENC for his advocacy on behalf of music education.

Advocacy Resource:
The "Make Your Case" database, powered by SupportMusic.com, will help you build a case for your music program when it's threatened.