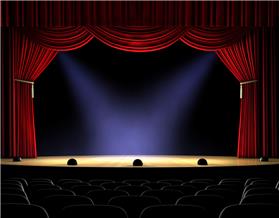 Waiting backstage, the familiar symptoms return. The palms moisten, the stomach becomes queasy, the heart beats harder and faster, breathing becomes more shallow, the knees feel weak. "Here we go again," you think to yourself, disgusted that the cycle is seemingly beyond your control. Is it possible to overcome the body's natural defense mechanisms? To use the surge of adrenalin in a positive way to enhance instead of hinder a performance? Of course it is. It just takes some understanding and practice.

Fight or Flight: The Human Body in Survival Mode

Those familiar feelings are caused by the production of adrenalin. Your brain receives those primal impulses and your body goes into "fight or flight" survival mode. Your body is reacting to perceived danger - it is primed for anything. Response time is quickened; senses are fine-tuned. You can jump higher, run faster and play daunting technical passages. Although your body is telling you to run, you must stay and complete a performance. So how do you minimize the negative effects of adrenalin? By changing your perception, by viewing the physical changes as excitement, not panic. By learning to slow down, breathe deeply and focus that additional energy into a passionate and exciting performance. This takes practice.

Lack of preparation is a leading cause of stage fright. If a performer is unsure of his or her technical ability to pull off a successful performance, that adds even more pressure and jitters. Especially in the public school setting, there is rarely enough time to fully prepare students for performance.

- Pick music well within the technical range of the group. A sure success is better than a rocky performance.
- Do not start practicing with instruments. If there is a recording of the work, listen with students following their parts. Demonstrate difficult passages for your students. Use as many senses as possible to experience the music before physically playing it.
- Address all of the difficult rhythmic passages away from instruments. Have the students clap or speak (counting out loud is always good) these passages before attempting them on the instrument. Then, with the instrument, do a monotone version, rhythm only. Only after the rhythm is solid, attempt the passage with pitches.
- Divide each piece into small sections, rehearsing only one section at a time for accuracy. Point out where sections repeat. This makes the task of learning a longer work less overwhelming.
- Practice slowly. An assault at full speed on a difficult passage rarely spawns confidence and courage.
- During your rehearsal time, be sure to schedule a sure success. This cuts down on the frustration of the group. If students can do something well first or last, then the hard work in the middle is more bearable.
- Schedule "dry run" performances well in advance of the actual performance. The more the students go through the motions of performing, the better the performance will be, with much less stress.

We've all heard those negative, self-defeating voices in our heads. The fear of failure, fear of embarrassment, the performance of music is such a personal experience. We feed ourselves negative self-fulfilling prophecies. Replace the negatives by feeding your brain positives, practicing that all-important skill of ignoring the mistakes while delivering an exciting performance. One question to ask yourself: Is pretty good, good enough? Should we not strive for excellence in a performance? Make sure that the work being performed is at the "pretty good" stage at least two weeks before the performance, so that the last 5 percent of the learning process may be achieved easily. This will quiet the voice inside, calm the fears and allow a more confident performance. We are not striving for perfection; excellence and perfection are quite different. As musicians, our goal is to entertain, to share the love of our art with others, to move people emotionally, intellectually and spiritually. Perfection is not our goal and the failure to achieve it is not a punishable offense. Relax and enjoy the music making process.

As teachers, we must be conscious of the subtle messages we send to students. It is good to keep parents separate from students at festivals and auditions, as they tend to add expectations and pressure. Be sure to emphasize to your students that at any level, their performance is unique and special; comparisons to more advanced peers is another source of stress. Music teachers, not only teach how to play an instrument: We are teaching an art, which is completely subjective depending upon technical level, and success is measured in steps. To teach a child to enjoy the art of music-making is a gift for a lifetime. To exaggerate the lasting effects of one performance is unnecessary; there will always be another chance. Don't allow 10 minutes out of a lifetime to become a life or death experience.

Act the Part. Performing is as much "acting" a part as it is executing a technical feat. A tool I've used with my students is having them attend a live performance featuring a professional artist on their instrument. Have them pay attention not only to the "music" being performed, but the "music" being portrayed - paying attention to the body language, posture, and breathing of the person on stage. Then have the students do an "imitation" in class. Amazingly, the body becomes more relaxed, the breathing deeper, posture is better. The students have reached outside of themselves and removed the internal pressure by pretending to be someone else. Giving students something external on which to focus actually improves focus on the task at hand, which is a secure, confident performance.

Potential memory slips are often a source of anxiety for performers. To remove this internal pressure, have students write a story about the work to be performed, putting specific feelings, actions and pictures with each section. Have them close their eyes and "run" the story in their heads like a movie. The more detailed the story, the more important communicating that story to the audience becomes. Another version of this is to picture the actual music running through the mind, visualizing the rise and fall of the notes.
Anxiety tends to build in situations where waiting is involved, such as for an audition or festival performance. Have the student imagine going to a safe place (i.e. a mountain meadow, a deserted beach). Before the performance, have them go off (alone), close their eyes and imagine playing the piece they are performing in that safe place. Hopefully the peaceful "residue" of this meditation exercise will follow them into the audition room. This takes weeks of practice to be done successfully.
Simulate performance parameters for students and allow them several "practice" performances. In a situation with a judge, sit behind a desk and write during their performance. If it's a recital, have them perform for their peers. The more "real time" performance practice the student has, the less frightening the actual performance will be.
Directed Breathing. This breathing technique, along with many others, is discussed in Robert Triplett's book "Stage Fright." Also see Barry Greene's "Inner Game of Music" and Kato Havas' writings.

Diet, Sleep and Other Management Skills.

- Avoid caffeine and nicotine, weaning yourself as early as two weeks prior to a performance. Both of these substances are stimulants. Increased adrenalin flow only compounds the effects of stimulants already present in your system; thus the tremors and increased heart rate will be much harder to control.
- Avoid processed sugars (i.e., candy, soft drinks). Natural sugars aid the body in converting stored energy to action. Processed sugars provide a brief high, but the overall effect is depressive.
- Eat a good meal, high in complex carbohydrates, low in sugars and fats. Pasta is an excellent choice, along with fresh vegetables and fruit.
- Arrive at the performance as rested as possible, establishing a consistent sleep pattern two weeks before a performance.
- Avoid listening to other performers in an audition situation. It only leads to playing the comparison game, which can lead to negative dialogue.
- Try to remember to breathe deeply before beginning any music-making. This sounds very elementary, but breathing is the first thing affected by the adrenalin rush, and good oxygen flow to muscles will steady nerves.
- Provide a quiet, safe place for students to relax before performances.
- Laughter is a wonderful tension release; come prepared with a few good jokes.
- Remind your students continually that music-making is fun. We have chosen a career in music education because we love music. Don't blow out of proportion the importance of one performance. Put in proper perspective, it is just one moment in a long lifetime of making beautiful music. Careful preparation produces confident performances. Make sure that classroom preparation includes stage fright management skills as well as learning the notes!

Lynne Latham, founder of Latham Music, earned a B.M. and M.M. in cello performance from Miami University in Oxford, Ohio. She currently maintains a private studio of violin, viola and cello students in the Winston-Salem, N.C., area. She is also a frequent freelance performer and a former member of the Greensboro Symphony Orchestra. She has served as a clinician for Cello Day Festivals in Virginia, Ohio, South Carolina, Georgia and California. Latham has served as a clinician for the 1997 North Dakota and 1998 Maine Educators Conventions, the Colorado ASTA Summer 2000 Workshop and the 2001 Indiana Music Educators Convention. She has also been adjunct faculty at Pfeiffer University in Misenheimer, N.C., teaching string methods and applied music studies. She is a past-president of North Carolina ASTA with NSOA and maintains memberships in MENC/MIC, the String Industry Council, Music Publishers Association and RPMDA.

Reprinted with permission of School Band and Orchestra magazine

Please visit them at www.sbomagazine.com