How Music Makes Your Child Smarter 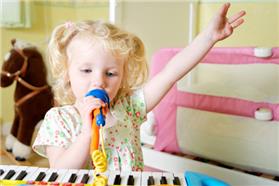 Move over, Beethoven and rock me, Amadeus. When it comes to raising your very own Jonas Brothers, exposing your children to music as they're growing up isn't only beneficial, it's well - a no brainer.

Consider this: music isn't only an effective way for children to express themselves, it's a way to foster creativity, confidence, and collaboration. So how do you raise a mini Miley, you ask? It all starts with encouragement. "We encourage creativity and confidence and give them the opportunity to grow whether it's music classes or a general edge of creativity," says Adam Jacobs, executive director of Kids Creative, a non-profit organization that offers arts based peace education programs for pre-K to high school aged students through after school programs, workshops, and summer camps.

If parents want to engender a safe environment they should be engaged and provide an environment with musical freedom. For instance, at the Kids Creative summer camp children come up with a variety of ideas in a safe environment which results in developing and performing in their own play! One way to get the musical prowess and artistic ability out of them is to incorporate a lot of interactive activities. Adam notes, "We think about what games where we will get the most creativity from the kids." Case in point: when their summer campers spend half a day running around a park this usually results in bursts of creativity afterwards. "All ideas are good. There are no no's," he says.

By emulating this formula essentially musical freedom stems from involvement that's peaceful at heart. "It's a life building program whether they gain confidence or just get better in math…One of the building blocks of a personality is to believe in your own ideas whether it's dance, music, art – anything and getting overly excited about the kids. That's something we emphasize a lot," says Stephen Jacobs, co-founder of the whole kit and caboodle and president of the Dirty Sock Funtime Band as seen on Noggin's Jack's Big Music Show.

In fact, the Jacobs brothers are onto something. According to a recent study, 3 - 4 year olds who were taught to play a piano scored significantly higher on tests of spatial-temporal reasoning than children who received no such instruction. Convinced yet? Spatial-temporal reasoning - the ability to accurately form mental images of physical objects and to recognize variations in their shapes and positions - is a precursor to logical thinking, abstract thinking, and problem solving. It is a key to the higher brain function required in mathematics, physics and engineering. In a 1998 study with 2nd graders, Shaw found that the children studying piano scored higher on tests of proportional reasoning and fractions. The music instruction apparently prepared students for higher math.

Ok, so now that everyone's in tune with the benefits and realizes it's not about generating record deals for your tykes but rather creating an avenue of expression, our friends in the 9 piece colorful band who are currently recording an album say the bottom line is simply exposing your kids to music. Adam (a.k.a. Mr. Clown in the band who is often seen wearing a multi-colored tuxedo and wig) explains, "It's a blast being able to give kids their first rock and roll experience! It's really fun to see a three year-old mosh pit…we love to jump around." Stephen adds, "At concerts we try to bridge the stage to the audience. The kids are listening to songs and doing something; we believe in getting kids to participate."

So even when you expose your kids to a high energy show, Stephen adds, "The key part is listening to kids and hearing what they're actually saying. Kids are experiencing the world extremely different than we are." Net net: it's our job to cultivate an environment of creativity, encouragement, and yes – listening.